Single by Dream Ami
from album Re: Dream

"Hayaku Aitai" (はやく逢いたい; I Want to See You Soon) is the fourth single of Dream Ami. It was released on March 22, 2017 in three editions: CD+DVD, CD only and One Coin CD. The One Coin CD edition was only sold at mu-mo online store, at LDH Mobile store and at E-girls FAMILY official CD/DVD shop fanclub.

The song was used as theme song for the movie Hirunaka no Ryuusei, which GENERATIONS/EXILE member Shirahama Alan stars on it.

An acoustic version of the song was released digitally on May 3, 2017, and later included in the CD Only edition of her fifth single "Kimi no Tonari". 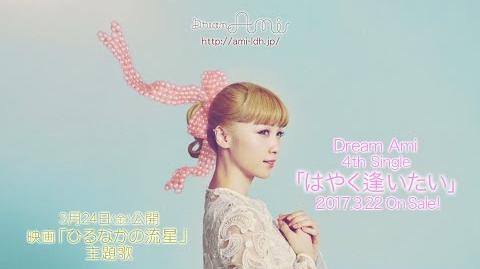 Retrieved from "https://e-girls.fandom.com/wiki/Hayaku_Aitai?oldid=15875"
Community content is available under CC-BY-SA unless otherwise noted.