The E-girls Pyramid was a system used by LDH to manage the E-girls line-up. It was introduced on January 27, 2015.[1] The system was discontinued in June 2017 due to the new project E.G.family.

Before the E-girls Pyramid, LDH used the system to manage the line-up due to the large amount of members back in 2012 with the addition of bunny and EGD. The increase in number led to a new system for the release of their next singles in which the girls were required to undergo a period of training and afterwards, the girls who excelled and fit the image of the single would be chosen to participate. That system started with the single "Follow Me" in 2012 and it is still being used to define the line-up of their singles.

On January 27, 2015, LDH officially announced the E-girls Pyramid, which follows the same system used for the singles but with the group's official line-up. The girls undergo a series of reviews configured annually. For the current members who need more training gets downgraded and classified as Rabbits (high school age or older) or Bunnies (junior high school age or younger).

On June 4, 2017, it was announced that E-girls, as a collective project, became E.G.family, with the units that were part of it becoming independent; and E-girls would also become a regular girl group with a fixed lineup. With this, the E-girls Pyramid was discontinued and replaced by a new system called EXPG Lab, where EXPG students are selected and put into a dance team and vocal unit, with occasional lineup changes. It is a group that aims at being artists while challenging various possibilities and opportunities. This project includes both female and male students.

The first pyramid, announced on the same day, consisted of: 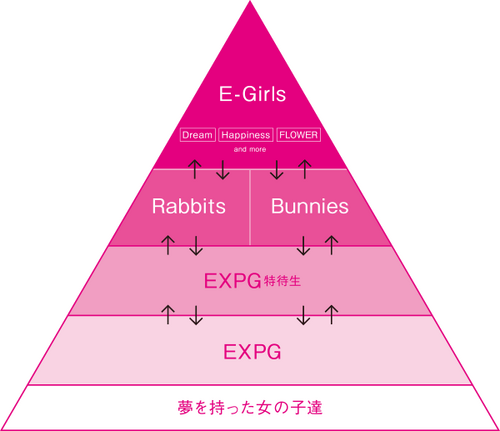 As of January 2017, the pyramid line-up was composed by:

Retrieved from "https://e-girls.fandom.com/wiki/E-girls_Pyramid?oldid=15564"
Community content is available under CC-BY-SA unless otherwise noted.