"MUSIC IS MY THING"

dream world is the first cover album of dream and also their first album as an 8-member group. It was released on February 26, 2003 and it features covers of pop songs from the '80s and '90s. It was released in two versions, a limited CD+DVD edition and a regular CD Only edition. The limited edition, limited to 30,000 copies, comes in a special box, and includes several bonuses: a mini photobook, a 2003-2004 school calendar, a trading card, and a sticker. 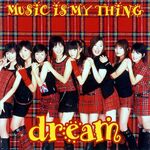 "MUSIC IS MY THING"

Retrieved from "https://e-girls.fandom.com/wiki/Dream_world?oldid=14524"
Community content is available under CC-BY-SA unless otherwise noted.